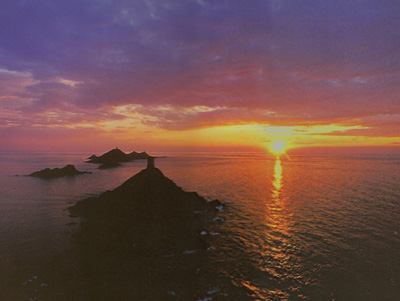 What is a Corsican Shaman?

In Corsica isolated by sea and mountains, the practice of magic has retained its everyday place. The Corsican shaman or mazzeru, not very well known outside of Corsica, date from prehistoric times. There are men and women who have the faculty for foreseeing the future and are believed to hold the explanation of the mysteries of life and death. Their office is to be healers of body and soul. To become a Corsican shaman it is necessary to have a psychic gift to open the door to the parallel world. The origin of the gift is as important as the gift of poetry, music or the spiritual awareness that leads to a religious order or priesthood and is immensely respected in the island. The "gift" runs in certain families and is carried on from generation to generation. In Corsica no one can deliberately choose to become a shaman, first and foremost the person must be of Corsican lineage and speak the language. The initiation takes place at an early age by a relative who is a practiced shaman and sometimes in the dreamtime by a deceased family member. Once called, a shaman or healer cannot abandon his or her vocation as it is believed to be controlled by a higher power and this might offend the basic nature of the calling.

The Corsican shaman believes that everything is of Spirit and communication with spirits is a total part of the trade in which they serve their community and of course those in need of their assistance. Each shaman has a personal myth that explains how he or she began to cure and how that power was acquired. This personal myth needs to be conceptually separated from the actual learning process that shamans go though to acquire their skills. The personal myth usually tells of a dramatic trial in which the person almost dies and is forced into recognizing that he or she is destined to be a curer. My actual learning process started with participating in curing ceremonies, with my grandmother as a child. Later in life it was during a Near Death Experience that Spirit communicated to me that I was to return to earth to fulfill my destiny as a healer of souls.

A Corsican shaman never looks out of the ordinary, and "sticking out of the crowd" is regarded as disrespectful to the trade. In Corsica a significant part of sacred traditional music is polyphony (many voices), a small group of people gathering together to sing during specific occasions. The sacred use of polyphony is still used during sacred festivals and also to celebrate life's transitions such as death, funerals and mourning. The majority of Corsicans are Roman Catholic, although many practice the old religion that includes spirits, prophecy, and magic. Catholicism coexists with the mystical beliefs of the past saints and the worship of Mother Mary is very prominent in Corsica. The Beatìssima, the Blessed Virgin Mary, is the patroness of the island and the hymn to her, Dio Vi Salvi, Regina, is in effect the Corsican national anthem.

Located in the western Mediterranean, Corsica is located 160 km (99 miles) southeast of Nice, France. Famous for its independent and spirit, rugged beauty, Corsica was the birthplace of Napoleon Bonaparte. Corsica is rich beyond wealth, though not a place of high output or consumption. Human values are what people measure, rather than the value of things. Though many Corsicans have been adventurers, their roots are deep in their native soil, they derive a large part of their identity from their place of origin. French is the official language of Corsica, but most Corsicans speak Corsican. Corsican is not a dialect of French, it is an Indo-European language of Romance or Latin origin. It was an oral language and it was only at the end of the 19th century that it came to be written. Being orally transmitted, it has many variations, even from village to village. 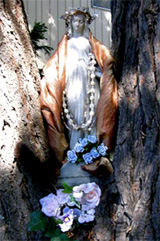